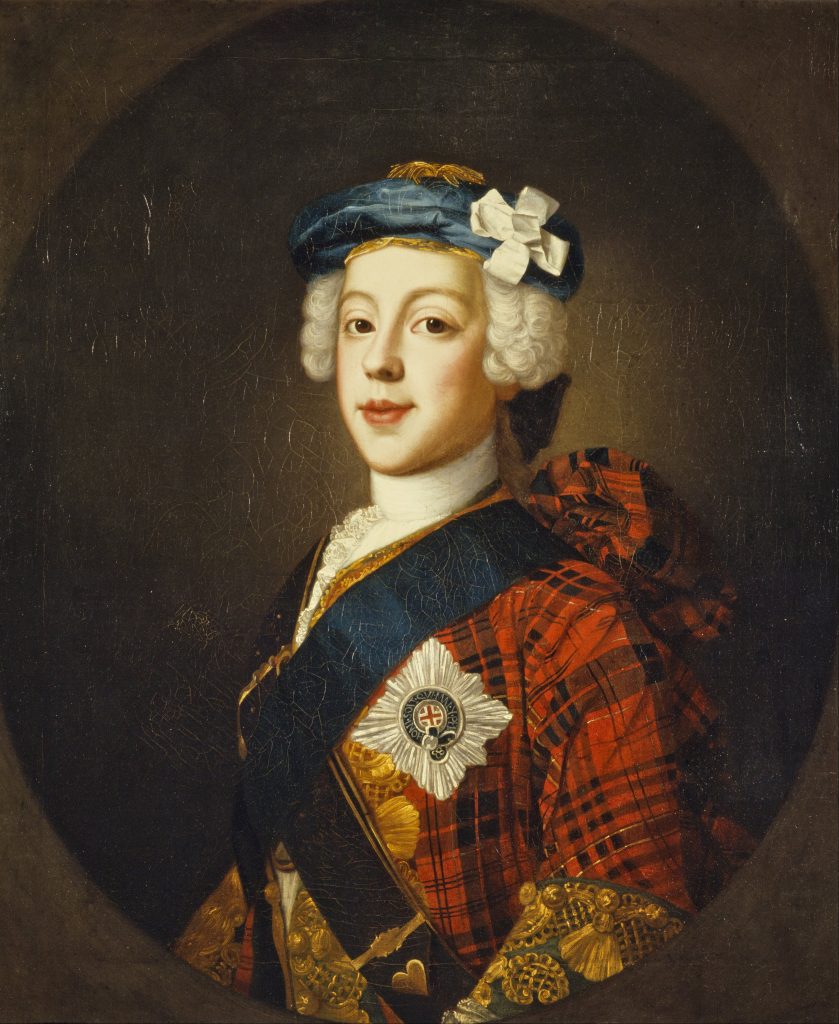 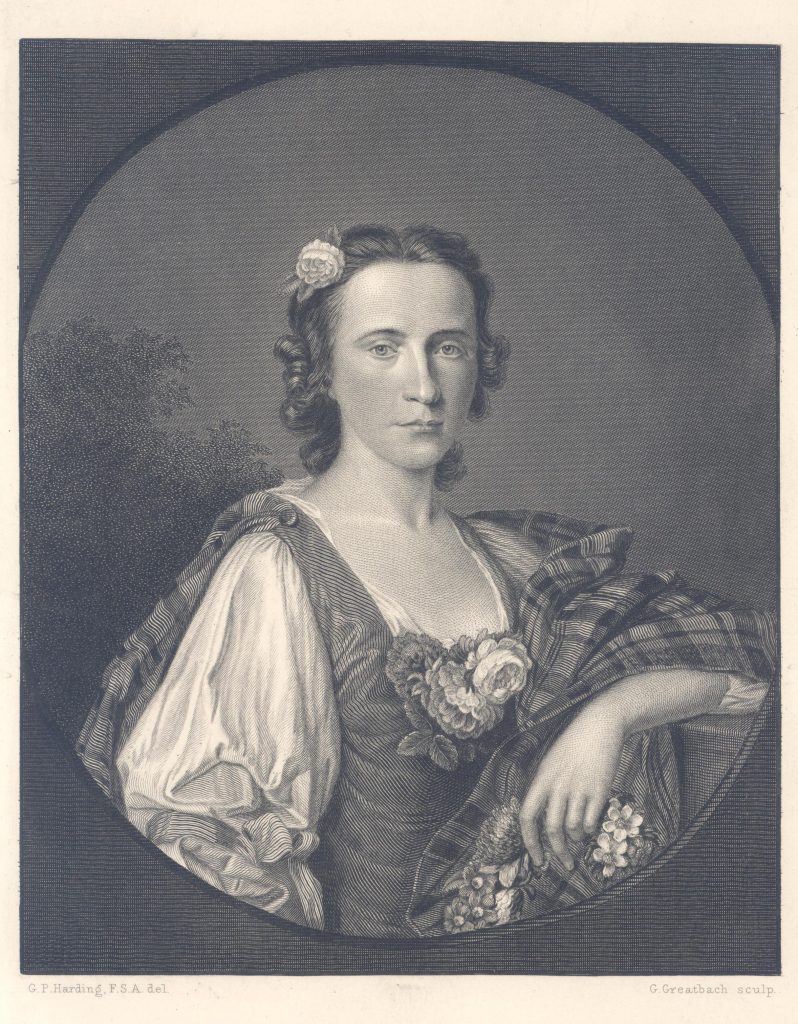 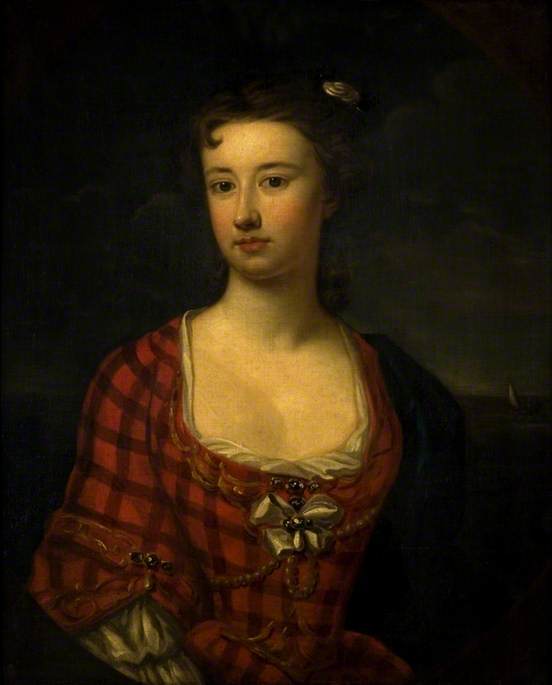 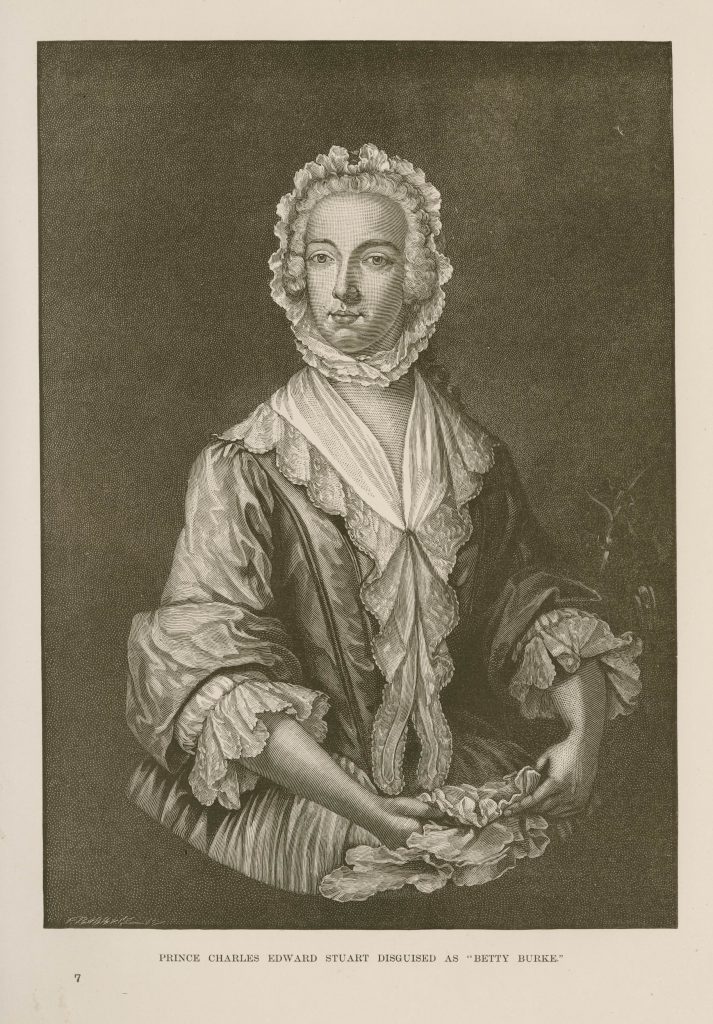 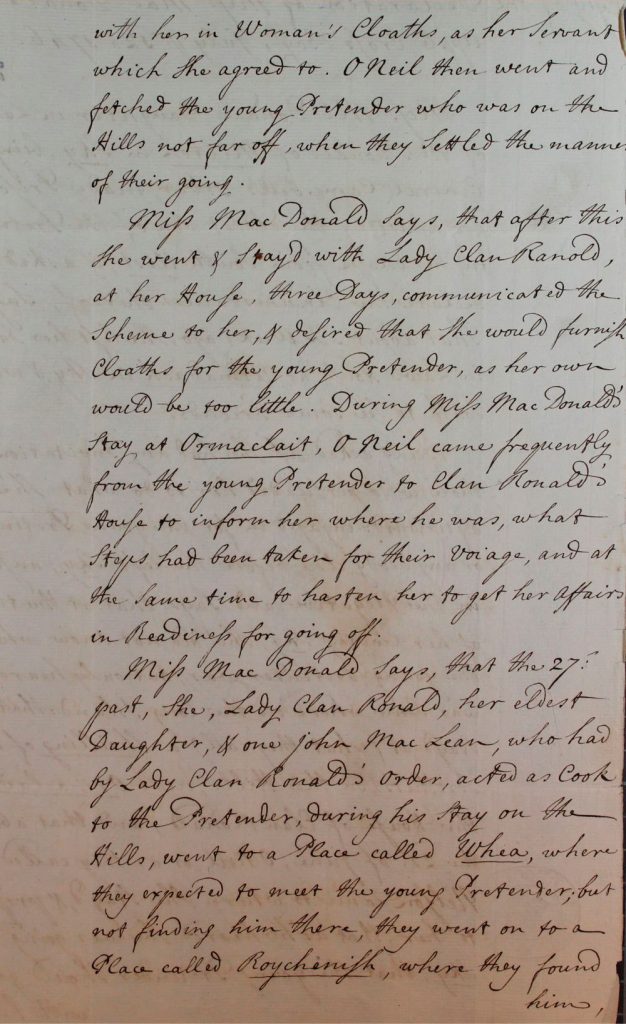 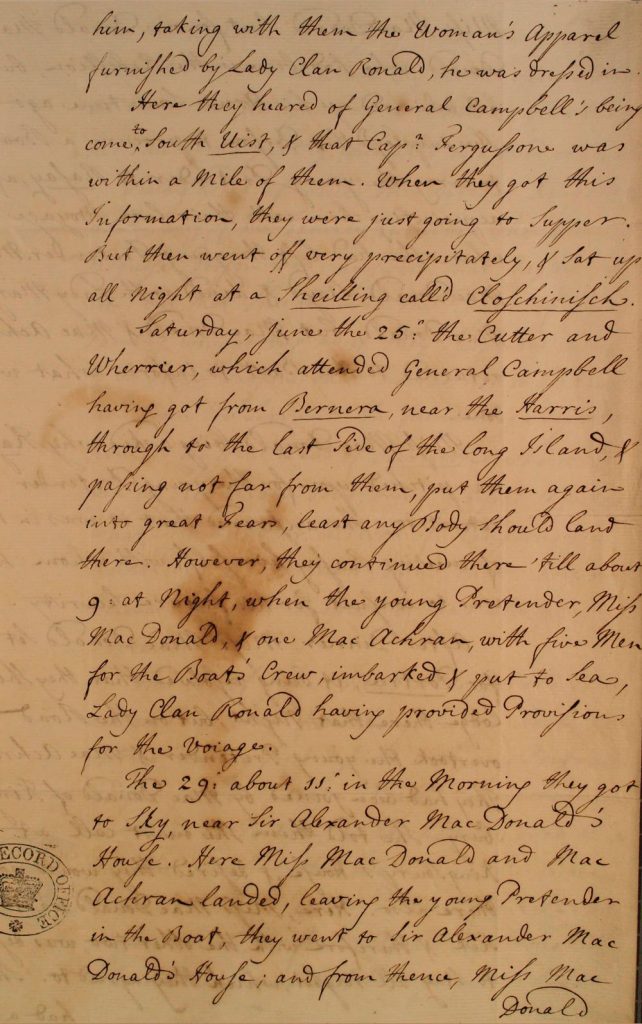 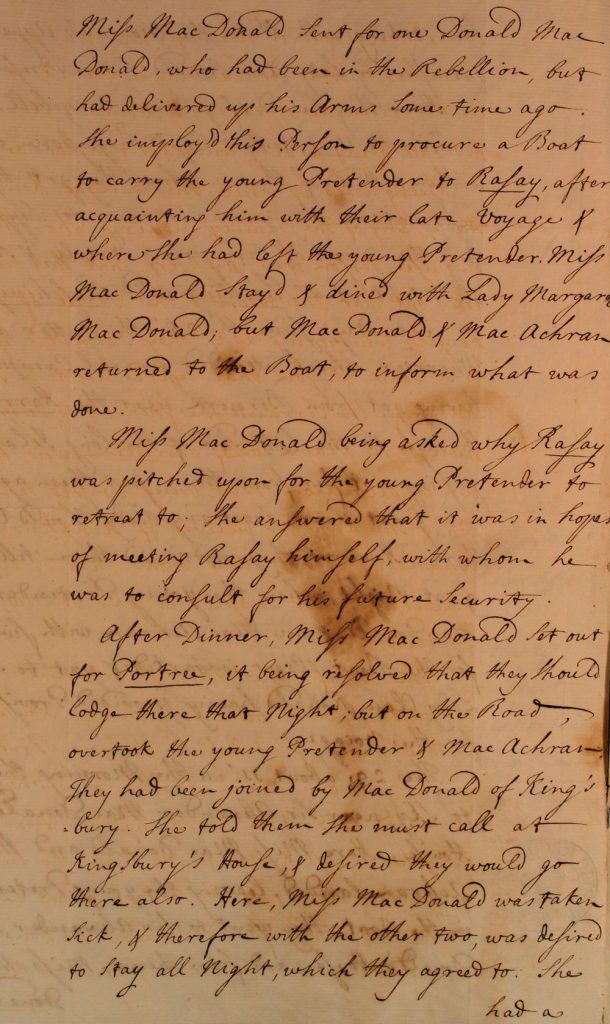 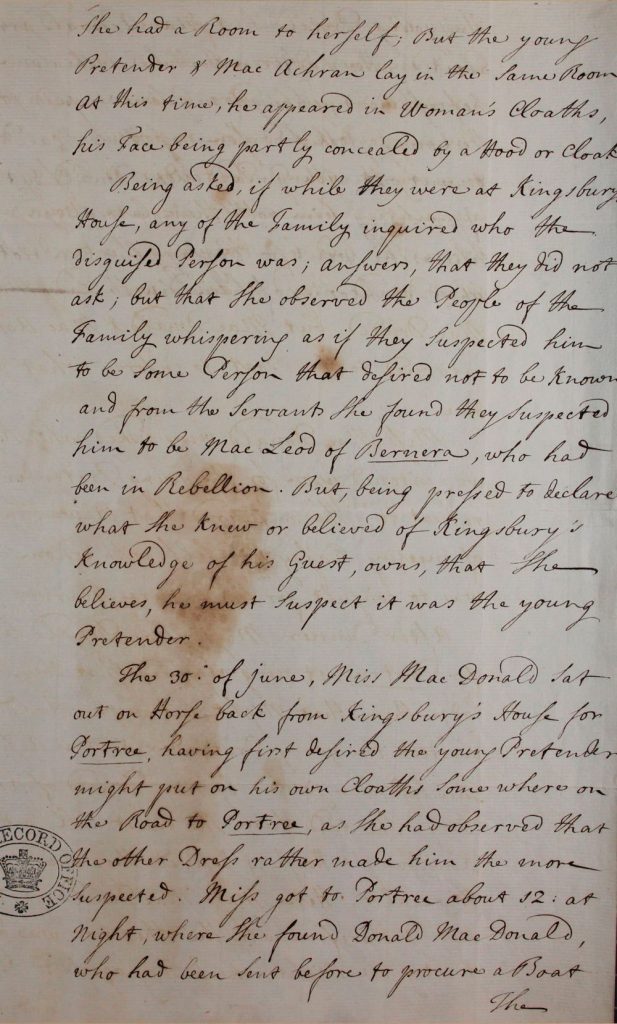 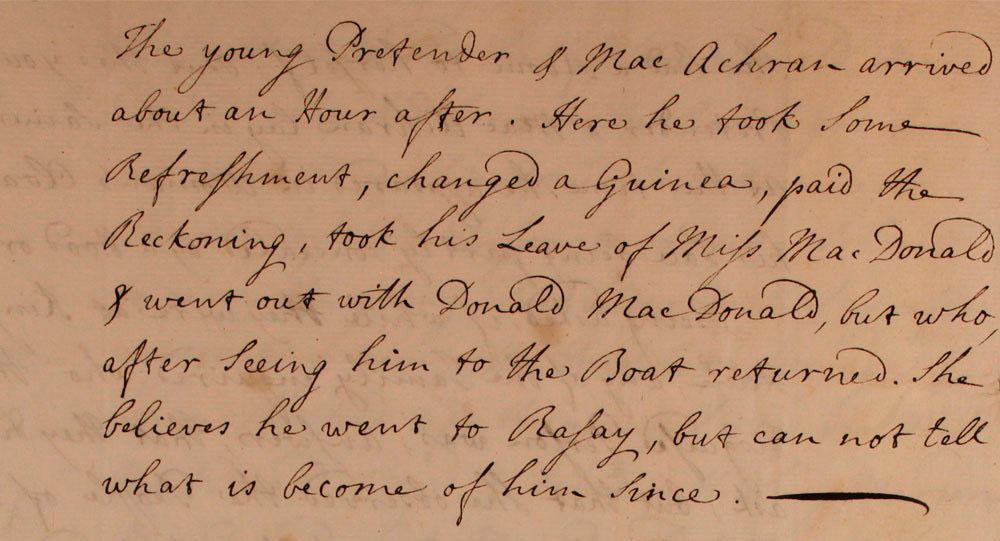 Miss Mc. Donald, Daughter in Law of Mc. Donald of Milton in Sky, [Skye] being, by General Campbell’s order, made Prisoner for assisting the eldest son [Bonnie Prince Charlie] of the Pretender in his escape from South Uist, & asked to declare the Circumstances thereof, says, That about six weeks ago, she left her Father in Law’s house at Armadach [Armadale] in Sky, & went South to see some friends.

Being asked, if she had any Invitation from those who persuaded her to do what she afterwards ingaged [engaged] in for the young Pretender or any Body else, before she left Sky; answered in the Negative, and says that at the time of her leaving Sky, she did know where the young Pretender was, but only heard He was Some where on the long Island: that she stay’d at (what they call) a Sheilling [small hut or cottage] of her brother’s, on the hills, near Ormaclait [Ormacleit] the house of Clan Ronald; and that, about the 21of June, O Neil, or as they call him Nelson, came to where she stay’d, & proposed to her, that as he heard she was going to Sky, that the young Pretender should go with her.

With her in Woman’s cloathes [clothes], as her servant which she agreed to. O Neil then went and fetched the young Pretender who was on the Hills not far off, when they settled the manner of their going.
Miss MacDonald says, that after this she went & stay’d with Lady Clan Ranold [Ronald], at her House, three days, communicated the scheme to her, & desired that she would furnish cloathes for the young Pretender, as her own would be too little. During Miss MacDonald’s stay at Ormaclait, O Neil came frequently from the young Pretender to Clan Ronald’s House to inform her where he was, what stepps had been taken for their voiage [voyage], and at the same time to hasten her to get her affairs in Readiness for going off.

Miss Mac Donald says, that the 27th past, she, Lady Clan Ronald, her eldest Daughter, & one John MacLean, who had by Lady Clan Ronald’s order, acted as Cook to the Pretender, during his stay on the Hills, went to a place called Whea where they expected to meet the young Pretender; but not finding him there, they went on to a Placed called Roychenish, where they found him, taking with them the women’s Apparel furnished by Lady Clan Ronald, he was dressed in.  Here they heard of General Campbell’s being come to South Uist, & that Captain Fergussone was within a mile of them. When they got this Information, they were just going to Supper. But then went of very precipitately, & sat up all night at a Sheilling call’d Closchinisch.

Saturday, June 25th: the Cutter and Wherrier, which attended General Campbell having got from Bernera [Berneray], near the Harris, through the last side of the long island, & passing not far from them, put them again into great Fears, least anybody should land there. However, they continued there ’till about 9 at Night, when the Young Pretender, Miss Mac Donald, one MacAchran, with five men for the Boat’s crew, imbarked [embarked] & put to sea, Lady Clan Ronald having provided Provisions for the voyage.

Miss Mac Donald being asked why Rasay was pitched upon for the young Pretender to retreat to, she answered that it was in hopes of meeting Rasay himself, with whom he was to consult for his future security.

After dinner, Miss Mac Donald set out for Portree it being resolved that they should lodge there that Night; but on the Road overtook the young Pretender & Mac Anchran of Kingsbury. She told them she must call at Kingsbury’s House, & desired they would go there also. Here, Miss Mac Donald was taken sick, & therefore with the other two, was desired to stay all night, which they agreed to. She had a Room to herself; But the young Pretender & Mac Achran lay in the same Room. At this time he appeared in women’s Cloathes, his Face being partly concealed by a Hood or Cloak.

Being asked, if while they were at Kingsbury’s House, any of the Family inquired who the disguised Person was; answers, that they did not ask; but that she observed the People of the Family whispering as if they suspected him to be some Person that desired not to be known and from the Servants she found they suspected him to be Mac Leod of Bernera, who had been in Rebellion.  But, being pressed to declare what she knew or believed of Kingsbury’s knowledge of his Guest, owns, that she believes, he must suspect it was the young Pretender.

The 30th of June, Miss Mac Donald set out on Horseback from Kingsbury’s House for Portree, having first desired the young Pretender might put on his own cloathes somewhere on the Road to Portree, as she had observed that the other dress rather made him more suspected. Miss got to Portree about 12: at night, where she found Donald Mac Donald, who had been sent before to procure a Boat then The young Pretender & Mac Ancran arrived about an Hour after. Here he took some Refreshment, changed a Guinea [twenty-one shillings], paid the Reckoning [bill], took his Leave of Miss Mac Donald & went out with Donald Mac Donald, but who, after seeing him to the Boat returned. She believes he went to Rasay [Raasay, an island between the Isle of Skye and the mainland of Scotland], but cannot tell what is become of him since. 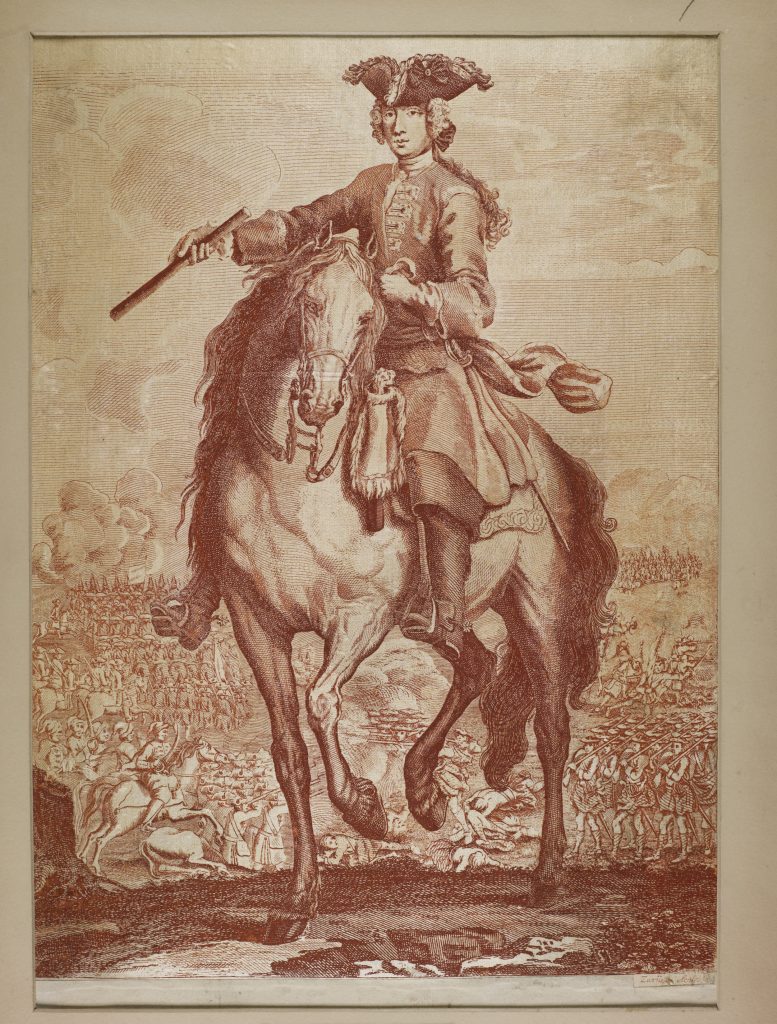 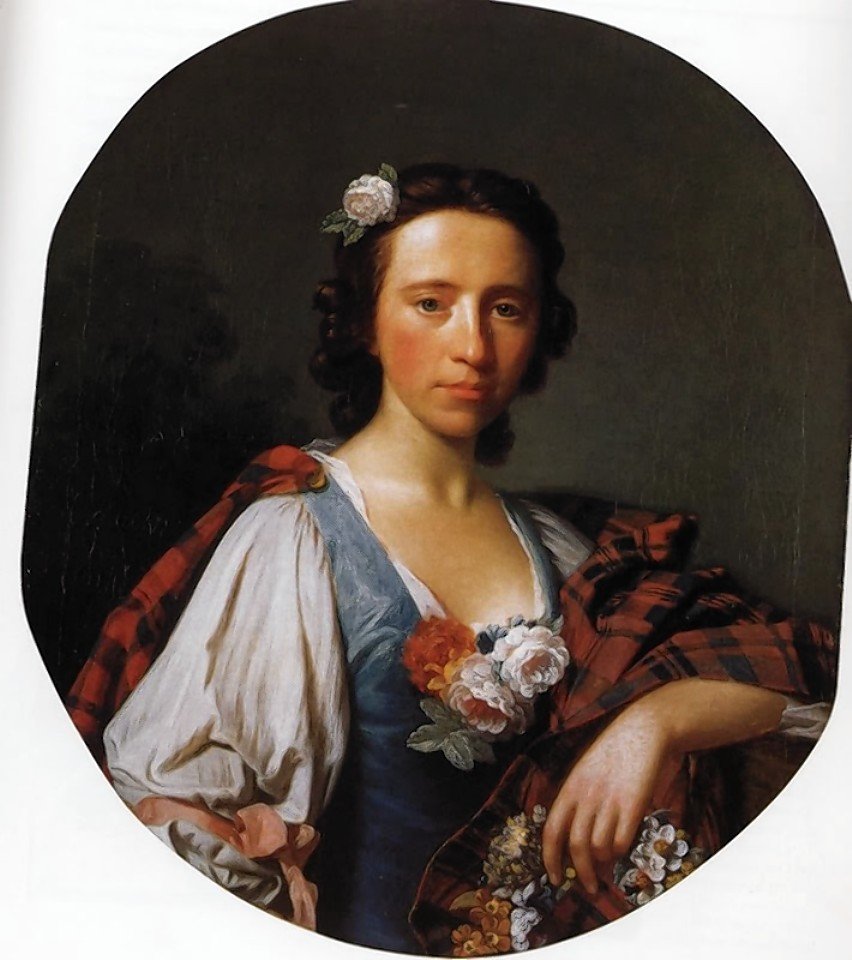 Paroles originales (1884)
[Chorus:] Speed, bonnie boat, like a bird on the wing,
Onward! the sailors cry;
Carry the lad that’s born to be King
Over the sea to Skye.

Loud the winds howl, loud the waves roar,
Thunderclaps rend the air;
Baffled, our foes stand by the shore,
Follow they will not dare.

Though the waves leap, soft shall ye sleep,
Ocean’s a royal bed.
Rocked in the deep, Flora will keep
Watch by your weary head.

Many’s the lad fought on that day,
Well the claymore could wield,
When the night came, silently lay
Dead on Culloden’s field.

Burned are their homes, exile and death
Scatter the loyal men;
Yet ere the sword cool in the sheath
Charlie will come again.

Poème de Robert Louis Stevenson (1892)
[Chorus:] Sing me a song of a lad that is gone,
Say, could that lad be I?
Merry of soul he sailed on a day
Over the sea to Skye.

Mull was astern, Rùm on the port,
Eigg on the starboard bow;
Glory of youth glowed in his soul;
Where is that glory now?